Latino In America
By: Soledad O’Brien 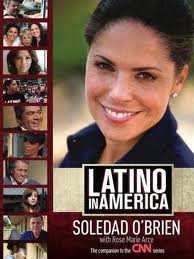 At a time when the U.S. Census Bureau is releasing data like, “More than half of all babies born last year were members of minority groups, the first time in U.S. history,” I thought it would be a good idea to re-read this book about the leading minority group of our country, Latinos. When I read this book the first time I learned that “Latinos are already the majority minority in the United States and their numbers are so great that they will be the future of this country even if immigration stops tomorrow. The number of Latinos who are U.S.-born now surpasses the number of immigrant Latinos. The average age is in the teens. This young population wants to identify as Latino, they want to speak the Spanish of their ancestors no matter how many generations they are removed from immigration. They are proud of who they are” (O’Brien 6). What I enjoy about O’Brien’s journalistic style, is that she conveys what it means to be Latino through interviewing many different people across the United States. Much like Mr. Rogers used to begin each episode of his television show by inviting viewers to be his neighbor and to join him as he ventured out into the neighborhood to meet other neighbors, O’Brien introduces us to our Latino neighbors. We get a peek into their daily lives; we get to know them; we get to break down the barriers of culture to discover a neighbor; we may even get to meet someone who is much like us, who shares our own values, who can be a friend. This investigative, yet neighborly, approach better reveals how no single stereotype can describe what it means to be Latino in America. Just like each person in this country, each Latino has his or her own unique story, family history, value system, and identity. O’Brien begins the book with her own story–she is a Latina of Cuban descent–and then commences to take readers along with her on her journey through the United States where she discovers the rich intricacies of just what it means to be Latino in America, and how Latinos are re-shaping what it means to be American.
From the back cover . . .
“CNN anchor Soledad O’Brien explores how tens of millions of Americans with roots in twenty-one different countries form a community called “Latino.” As she reports in a CNN documentary on Latinos changing and being changed by our country, O’Brien recalls her own Latino upbringing and what she’s learned about being a Latino in America.
Following the smash-hit CNN documentary Black in America, Latino in America travels to small towns and big cities to illustrate how distinctly Latino cultures are becoming intricately woven into the broader American identity. As she reports on the evolution of Latino America, O’Brien finds out what it means to be American for millions of this country’s people.”