Today’s a Day for Just Reminiscing…

For those of you that follow my blog, you know I have been posting some old blog entries from my days in Spain six years ago.  To my new readers, Hello! And to all of you, here are a few last posts from my time in Madrid.

Everyone Knows I’m In Over My Head…
Saturday, 7 October 2006 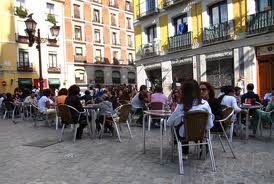 10.  One thing that I would import from the Spanish culture to my culture is sidewalk cafes.  As you walk through Moncloa, or any neighborhood in Spain, up and down every street, you’ll pass sidewalk café after sidewalk café.  At first when I came to Spain, I thought they weren’t a very friendly culture.  The more time I spend here though, the better I am able to observe and understand.  Today I had a quiet, humble meal at lunch time at one of these sidewalk cafes.  It was situated just on the outskirts of Parque del Oeste and Parque de las Montañas.  Today is Saturday, so all of the families were out together.  It’s very common to see families.  Even youth-age kids and older 20s-30s, with their parents, enjoying a stroll through the park with their little dog, or enjoying a café con leche or a caña (draft).  Little kids run around like it’s their back yard, usually parents in toll fifty yards or so behind them–lollygaggin and talking with other adults.  The beautiful thing about Spaniards not having a concept of private space, or the “bubble” that Americans are known for protecting, is that everyone shares the space.  No one is a stranger.  Many times you’ll see someone stop and have a conversation with someone they don’t know, because their dog has run up to that person’s dog to play (they don’t believe in leashes here).  It’s really neat actually to see how the people pass their Saturday’s away.  A peaceful afternoon using cafes and parks like living rooms.  The parks are full of people–an old couple sitting on a bench, the woman with her shoes off sitting backwards to soak in the sun while her husband reads her the newspaper; a group of girls stretched out on the bench with a towel laid out in front for those who don’t fit on the bench, listening to their iPod, sharing snacks, reading a book; a man with his sketchpad; two boys kicking a soccer ball back and forth; a group of boys with their Coca-Cola and  rum (soon to be reprimanded by the policía–drinking in public is (sort of) illegal); a woman sitting by herself enjoying a cigarette.  The park is there at your disposal to relax and not rush in the new week.

Okay, so definitely I was in this bar last night in Huertas (one of the really fun and interesting neighborhoods of Madrid) just chilling with some friends.  We had gone to Huertas to see some jazz at Populart, but all of the tables were reserved, so we decided to come back another night.  It took us forever after that to find a bar that had tables for us to sit at, that was cozy, not too full, not too much like a restaurant, not to dark, not too creepy . . . haha, anyways, we found one.  It was a cute little place with mostly older people, like 50s-60s and a few younger people like us and maybe one or two couples.  The waitress was really cute with dark spirals  covering her head–you know that hair that’s so cute and curly it bounces up and down.  We just ordered and had a nice relaxed conversation about–well not much, just life in general and whatever else happened to pop into our heads.  We were pretty sleepy, so it was just kind of chill.  Shortly after we came in, the bartender–a tall, plump man with wiry hair, receding hairline a plump round nose, and wild eyes–changed the CD he was playing (some nice salsa music) to a mix of jazz and big band music.  So we sat and enjoyed some Frank Sinatra and other classics.  All of a sudden, the lights went out.  Thunder and rain began to boom through the speakers, then some  la-tee-tee-da-ta-tee-ta-tee-tee-do-dee-do . . . .”I’m siiiinging in the rain, just siiinging in the rain, what a glorious feeling I’m hAAppy again . . .”  There were lights flashing here and there like lightening–the works.  We LOST it!  We were laughing so hard–who would have thought, in a bar, in Madrid, they would re-inact singing in the rain!  Then, just when we thought it couldn’t get any better, stranger, or funnier, the bartender man came dancing around through all the tables misting water above our heads with a spray bottle.  What a night.  What a story.  You just never know what these Madrileños are going to do next! 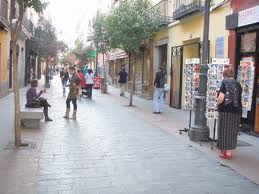 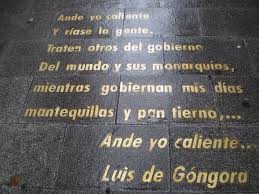 On the streets are written excerpts from poems and famous quotations.﻿