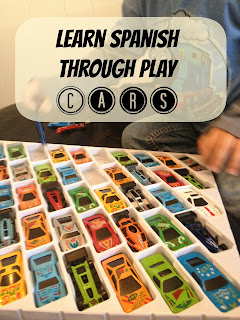 And now for the second installment of our Learn Spanish through Play: CARS series! My intention was not to come across as a cheesy game show host, but I think I failed.  Our previous post in this series taught some Spanish colors with a fun sorting game.  Try playing this “Same or Different” game while sorting your cars by color.  I am sure we all remember that song from Sesame Street: “One of these things just doesn’t belong here…One of these things just isn’t the same.”  Comparing differences helps us to understand concepts like shape, size, and color.
Mr. Big Stuff (my oldest son) just turned three and loves to be contrary.  Our Parents as Teachers lady on one of her visits suggested providing times when he can say “NO!”  This game is perfect for that.  Hold up two cars that have different colors or a different shape.  Say, “Are these cars the same?” to which your child can answer a silly “NO!”  Have the kidlets make funny matches and ask “Are they the same?”  Everyone can say “NO!” together, or “No, that’s silly!” (You can switch this around and hold up two cars that are the same and ask, “Are these different?”)
Try the “Same of Different” game in Spanish!  The word for same in Spanish is igual.  The word for different in Spanish is diferente.  In Spanish, describing-words (adjectives) have to be plural if the object you are describing (the noun) is plural.  In other words, if you are asking about more than one thing then your adjective has to match that.  When you ask about two cars then, change igualto igualesand change diferente to diferentes.

Here is a quick pronunciation guide.  Make your voice stronger on the syllable with italics.
iguales: ee-gwal-ehs
diferentes: dee-fehr-ehn-tays

In the pictures below, follow the conversation guide in the word bubbles.  The red text is what you say, and the black text is the answer the children give.  ¿Son iguales o diferentes? means “Are they the same or different?”  Son (pronounced sohn or sewn) is the word for they are or are they.  You can ask this question, or if you want to play like above so your child can answer “NO!” just ask: “¿Son igual?” if they are different and “¿Son diferentes?” if they are the same.