We have had a lot of fun around here lately doing alphabet activities and crafts alongside all the great bloggers participating in “31 Days of ABCs.”  Many of the activities we have chosen to do relate to fall or el Día de los muertos.  For the letter E (la letra E, pronounce “ay/eh”) we talked about esqueletos.  The song “Los esqueletos” from Babelzone on YouTube inspired us.  Even if you cannot understand all of the Spanish words, it has such a catchy tune you will find yourself singing along!

If you are having trouble viewing the video here, click this link to watch it on YouTube. 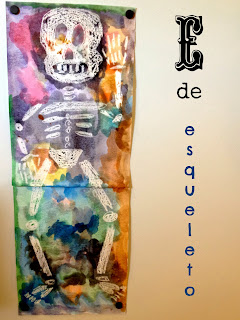 This song provides so many learning opportunities–it rhymes, it counts, it teaches time!  We will probably be re-visiting this song throughout October.  To keep it simple, we just worked on learning “E de esqueleto.”

With our first craft we used Q-tips as huesos and built an esqueleto on black construction paper.  I found the idea here from Pinterest.  My older child really enjoyed this craft.  First I made a calavera out of white construction paper and drew on a face with a permanent marker.  We glued the calavera at the top and added all the huesos underneath.  I had cut some Q-tips in half, so as I added the glue in the shape of an esqueleto, my son chose which Q-tips to lay down.

As you can tell from the picture, my two-year-old did not enjoy the craft as much.  He is at the stage where, whatever the project is, he wants freedom to do it himself.  Following directions or a pattern is not in his realm of interest.  Which is fine.  We glued on a few Q-tips together and moved on to just glueing anything we could find on another paper and throwing Q-tips. 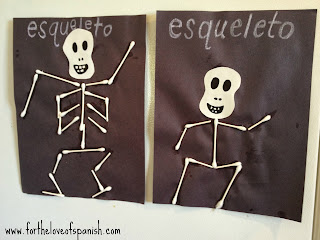 On another day, while my Little Guy was napping, I got out some watercolor paper and taped two pieces together.  I drew on a “secret” picture of an esqueleto with a white crayon.  Next I had Jefe (my older son) come over to see it.  I told him we were going to paint the paper with watercolors to reveal a secret message.  He kept trying to turn the paper over as we painted to find the message–it was cute.  Even though I knew what the secret message was, I think I had more fun than he did painting the paper and watching the esqueleto reveal itself.

This project was probably one of my favorites we have done so far this fall.  After we painted the esqueleto, we read a couple of books by Yuyi Morales about a skeleton character named Señor Calavera.  Both books are award-winning, recieving the Pura Belpré Medal for Latino/a authors and illustrators. 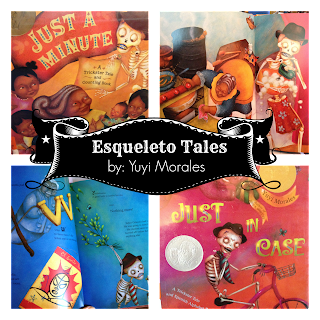 In the first book, Just a Minute!: A Trickster Tale and Counting Book

, Señor Calavera has an appointment with Grandma Beetle to take her with him.  However, Grandma Beetle needs to finish a number of tasks, and by the end Señor Calavera cannot wait any longer and leaves a note that says, “See you next year!”  I love how the author shows Grandma Beetle’s culture as it counts through the things she has to prepare and clean and do to get ready for her birthday fiesta.

The second book we read, Just In Case: A Trickster Tale and Spanish Alphabet Book

My almost-four-year-old was really taken by the text and illustrations of this book.  Morales depicts Grandpa Zelmiro so endearingly, that Jefe wanted to dress up like him.  I thought that was a great idea, so we dug through out dress-up clothes stash to find just the right outfit for “Grandpa Zelmiro.”  Pretty soon after that, the Little Guy woke up from his nap, so we dressed him up as Señor Calavera.  For fun, we went around the house collecting things from the Spanish alphabet for Grandma Beetle.  The boys got tired of playing that game before we got to la letra Z, but as we went to bed that night, Jefe saw the container we had collected the gifts in and asked if we could finish finding the rest the next day: a clear sign that he loved the book and extended play we did.  Yay!  If you have not read these books already, I highly suggest you check them out or any others written and illustrated by Yuyi Morales–you will not be dissapointed!

Later in the day, after reading and acting out the books, we sat down to do some “clipboard work,” as we call it.  We made la letra E out of esqueletos and did an esqueleto coloring page with dot markers.  You can print your own from the printable below.  We will be linking this post up with the “31 Days of ABCs” on the page for the letter E! 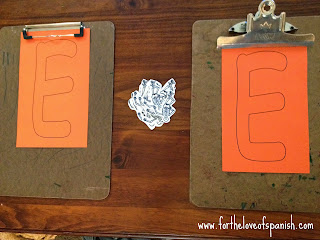 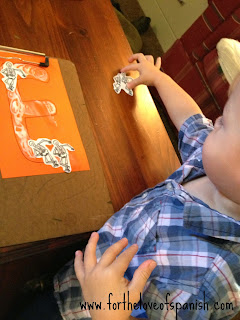 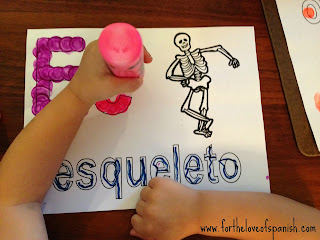 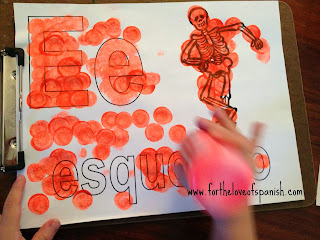