Practice with the Verb SER 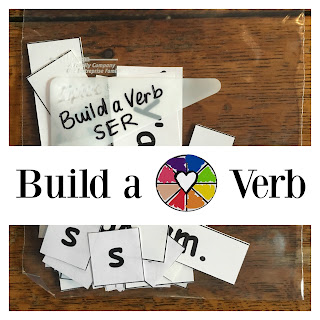 It seems somewhat backwards that students of a foreign language tend to learn about the grammar of a language before they can actually speak the language.  With our first language, we learn how to speak words first as a baby, then sentences as a toddler, until finally we begin learning about grammar as six- or seven-year-olds.  This natural order is why many teachers of a foreign language are using the TPRS method, or in other words a story-based way of teaching.  A great place to see this type of Spanish instruction in action is on Señor Jordan’s YouTube channel.  He tells a series of stories about a monkey on an island that are interactive and target specific grammar structures, so you will find yourself picking up some Spanish grammar without having to study it formally.  Eventually though, if you want to become proficient at a language you will need to study the grammar.  Most students don’t find this appealing, and that is why I always look for new, interactive ways I can teach grammar structures to my students without it feeling like a lesson.

I came up with this “Build a Verb” series for my brother.  I have been teaching him Spanish since he was around seven years old.  We have focused mainly on learning words and phrases.  I tried doing a formal textbook with him one year and he hated it, so we quit.  He loves learning and speaking Spanish, and I was not about to let a textbook stop him!  We later tried a workbook that he did okay with, but it still bogged down his learning pace and took the fun out of Spanish for him.  So we quit that too.  This year I created a video-based curriculum for him from things I found on YouTube.  After the New Year, I plan to introduce a few grammar “lessons,” and they of course will be interactive and fun.

To Be or To Be

Our first grammar point to tackle will be the verbs SER and ESTAR.  Both of these verbs mean “to be,” and are used frequently in everyday conversation.  We will use this “Build a Verb” game first to  practice saying the verb ser with different subjects (conjugation).  I made a printable for you too, so you can follow along.  First, print off the printable from the link below.  If you haven’t learned about this verb at all, go here next.  Then have fun building the verb for practice.

I will be keeping all of our Build a Verb sets in Ziplock baggies like this. 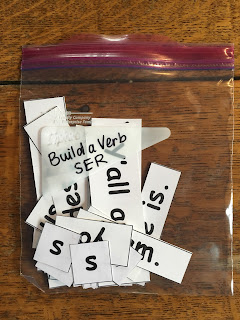 Included in the set you will find: all English phrases with the to be verb.  For example, “I am,” “You are,” “S/he is,” and so on.  Then also a set of Spanish subjects (the person or persons doing the action of the sentence), and a set of letters used to build the verb ser for different conjugations. 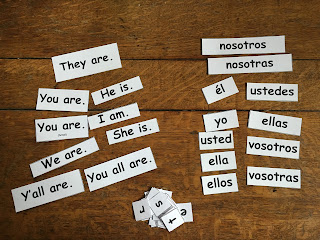 I made a grid out of tape to divide the different conjugations. You may have seen something like this before.  If not, let me explain.  The left side is for singular subjects: I, you, he, she, and it.  The right side is for plural subjects: we, y’all, you all, and they.

I started by laying out the English phrases first. 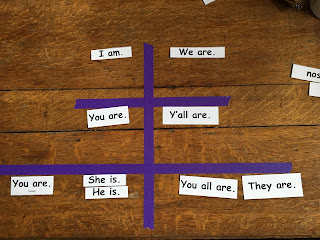 Next match up the singular Spanish subjects… 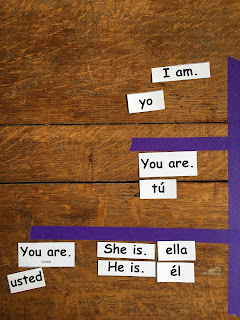 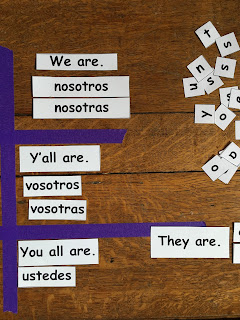 Then lay out all the single letters and start building the Spanish verbs.  There are a few extra letters you won’t need to make it a little extra challenging. 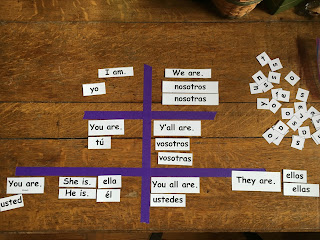 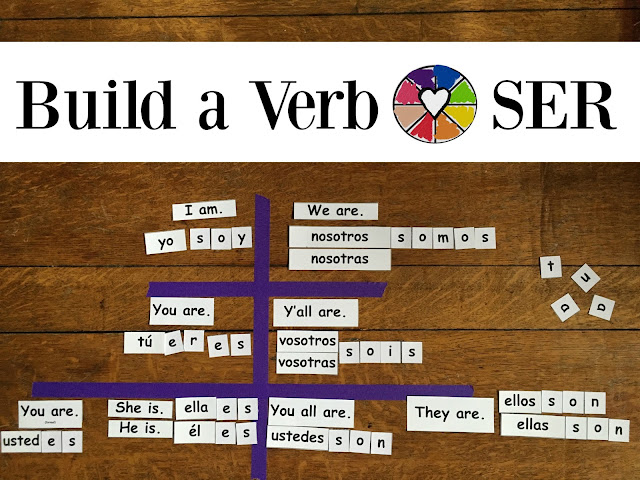 This exercise would be good to do more than once in a single sitting, as a team, or you could even have students race against each other or the clock.