After having my first son and quitting my day job to stay home with him, my mom asked me to start teaching Spanish to my three siblings that were still school-aged.  My first go at it was with my brother that had one year of high school left.  I did what any non-teaching-trained person would do: I pulled my old Spanish 101 college textbook off the shelf, opened the pages and taught him what I knew.  It was mostly a disaster, but we at least had fun.  He most likely remembers more funny stories of me trying to teach him than he does Spanish vocabulary or grammar.  But that’s not unlike most people who take high school Spanish as a requirement for one or two years.

I continued to teach my sister and youngest brother each school year after that.  By the time she entered high school, I had found a high school level textbook that I taught from for her Spanish 1.  I am proud to say that she graduated in May 2015, and when she took her Spanish entrance exam for college, she tested into College Spanish 202. That should largely be attributed to her dedication and discipline towards academics, but it did give me a little nudge that said, “See, you can help people learn Spanish!”

Now the only one left is my youngest brother.  Naturally when he began high school I said, okay time for Spanish NOW! Level 1–the book I had used with my sister and other high school homeschool classes.  It brought his enthusiasm for the language to a screeching halt; so I was sensible and said, “No more of that! Let’s keep having fun.”  Then his sophomore year rolled around and I said, “Let’s try this workbook.”  Nope.  We got through maybe one half before I said, “Okay! We still have time for more fun Spanish learning, right?”  Then this past summer I designed a syllabus for him that was all videos from YouTube I compiled to loosely follow a high school Spanish 1 scope and sequence.  He’s in the middle of it right now and loving it, so that has been great!  One element I realized we needed more of though, and that was conjugating verbs.

How was I going to teach him verb conjugation and keep it fun!?  Well it took me an entire semester to figure out a few ideas, and this month we have started trying them.

At the beginning of the school year, I printed these awesome Skip Counting Mazes from Beth Gorden over at 123 Homeschool 4 Me.  My Kindergartener loves them, and one day it hit me that this would make a great non-flashcard way to practice things in Spanish too.

I decided to make one for the verb HABLAR (to speak).  You can see it here below, and you can also print one for yourself from the link at the end of this post.

It was a bit tricky at first figuring out how to format it, write the directions, and I even tested out a few different versions on myself and my brother.  I finally settled on this one and will have him try it out when we meet next.

This particular maze will help students memorize the meaning of hablar, and how to conjugate it in the various forms. For those of you who don’t already speak Spanish, see my explanation of “conjugate” below.  Before doing this maze make sure you understand how to say the different subject pronouns in Spanish like I, you, me, he, she, we, they, etc.  You can watch this video to review the subject pronouns if you need a refresher. 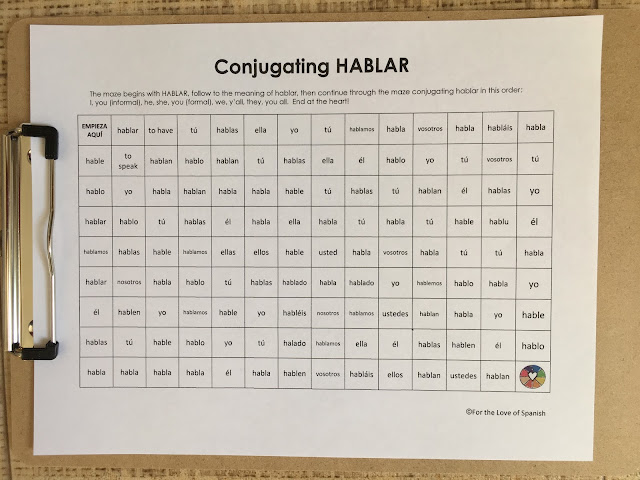 Here is what the maze looks like “solved.”  Even being the one to make the maze, I messed up a few times and went the wrong way (which is good, right? That’s how mazes are designed…).  So I looked off of my messy one, and made this one to give you a clear picture of what it should look like at the end. 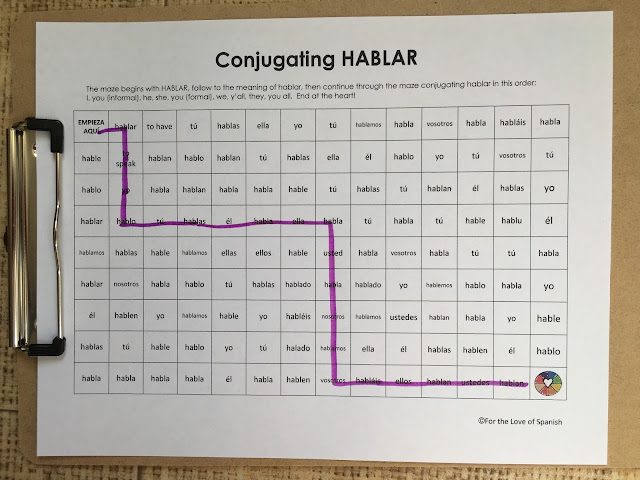 I hope you find this maze fun and helpful!  Feliz mazing!

—> GET YOUR OWN MAZE HERE TO PRINT FOR FREE <—
WARNING: GRAMMAR LESSON BELOW!!

Conjugate is a fancy word that means to change the verb’s ending depending on who/what is doing the action.  For example in English we conjugate to speak like this:

See how the verb changed from speak to speaks?  That’s conjugation.  In Spanish the verb changes in more ways than two, so it’s a little bit more to memorize than in English.  The verb hablar means “to speak,” in Spanish, and here is how you change it for different subjects:

Tú hablas. — You speak. (the informal you)*
Él habla. — He speaks.
Ella habla. — She speaks.
Usted habla.  — You speak. (the formal you)*
Nosotros hablamos. — We speak.
Vosotros habláis. — Y’all speak. (This informal you all is only used in Spain.)
Ellos hablan. — They (this can be male they or group of male and female they) speak.
Ellas hablan. — They (group of females only) speak.
Ustedes hablan. — You all speak.
*If you want to understand more about the formal and informal “you” in Spanish watch this video.