Read Along With Me! // Death in the Afternoon

Death in the Afternoon
by: Ernest Hemingway 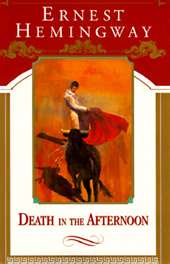 Before I traveled to Spain, I beefed up my personal library with a few books about the country.  One of them was the book Death in the Afternoon by Ernest Hemingway.  Hemingway was an expatriate spending a lot of his time in Spain.  He wrote a novel about bullfighting called The Sun Also Rises, and this book featured here which is more like a non-fiction guide to understanding bullfighting.  If there ever was a class called Bullfighting Appreciation (like those 101 courses in college that everyone has to take to learn to appreciate certain parts of culture) this would be the textbook.  I never read it before I went to Spain–I always have big ideas and big plans, but my follow-through is a little lacking–and I never went to a bullfight the four months I studied in Madrid.  Shame on me, I know.  I have never been much of an animal lover, but I also never had the desire to see them tortured and killed (basically what I assumed bullfighting to be).

Now, here I am, teaching a High School Spanish I class and our current culture unit covers Spain.  When people think of Spain, I think bullfighting is one of the first things that comes to mind, so I thought it would be a good idea to assign this book over Christmas break.  The book is 487 pages long.  All about bullfighting.  Let’s just say I didn’t think I was going to enjoy it.  Ninety-six pages into it I would actually consider it a page-turner.  Yes.  I want to keep reading.  The book hasn’t changed my thoughts about bullfighting, but it opened my mind towards it.  Hemingway has a way of capturing this intrinsic part of Spanish culture with his straightforward, journalism prose.  Reading the book, I am beginning to see the emotion and power of bullfighting for Spaniards–it’s like the old-time feeling of Americans towards baseball.  Bullfighting is not a sport, like baseball, where there is fair competition between opposing sides.  Rather, Hemingway describes it as a tragedy where the bull comes to die and the bullfighter’s job is to face the danger of the bull.  Together, the man and bull demonstrate, like a Shakespeare tragedy, the epic story of life and death.  The bullfighter–genius at his trade–transforms the fight into an art; if he is good, he draws the public, the spectators, into the story of danger and cowardice, honor and pride, life and death.

I’m not going to draw any conclusions about whether or not bullfighting is good or bad, right or wrong, but I will say that after reading this book I have come to appreciate how the art reflects a deep part of every Spaniard’s soul.  The book I thought I would dread, I recommend as a good–even intriguing–read.